We’ve reached the most important part of the year – when the garlic we planted in April has almost reached maturity. When we hope to be, in the spirit of the season, joyful and triumphant.

So in absence of a movie montage, or a deep, reassuring voice-over, lets revisit in the old-fashioned way what went on in Ballan in 2016 –

April saw us visiting our borrowed paddock in Ballan,  feeling the anticipation and being a bit smug that we managed to score such a dreamy site.

Soon afterwards we met up to divide and break the bulbs, ready for planting. It was firmly decided that evening, that everything is better with friends and wine – 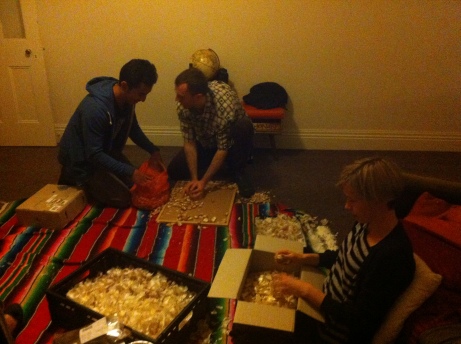 By early May, we were planting hurriedly into an area matted with luscious couch grass. So, with time running against us (other farmers had their garlic in already) we cleared the 120 square metres with the only thing we had available – a rotary hoe. Hopeful amateurs, we were doing the best with what time and budgets allowed – 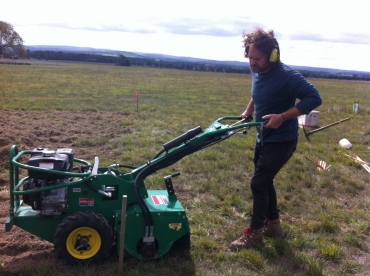 Planting day arrived soon enough and we were like pigs in mud (happy that is) to be finally putting our grand plan into action: bulbs planted and sheep manure scattered – 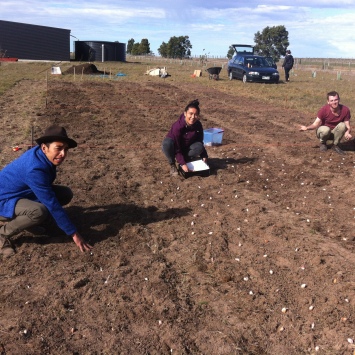 It didn’t take long for the little seedlings to appear…oh, sigh, be still my beating heart..

(It’s probably pertinent to note  here that over the next couple of weeks, we heard rumours of that mystical creature – “The Weed”. Pffff! , we scoffed, not in our perfect patch). 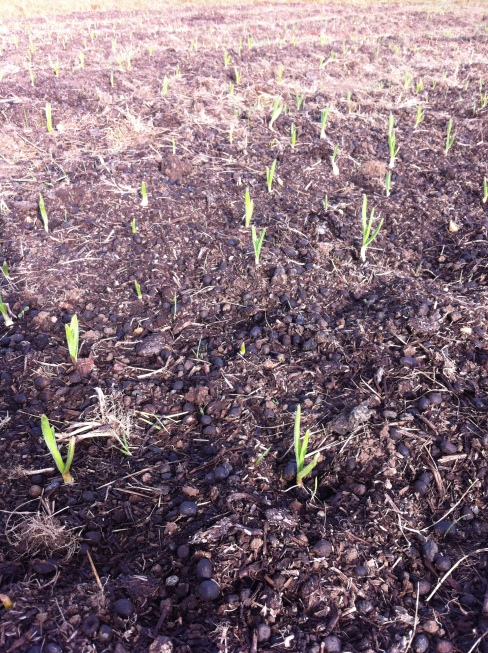 As the months began to cool, we conceded there was some evidence of weeds popping up.  So, we mulched the five rows with pea straw, deciding that alone would put a stop to the couch grass.

In the twenty four hours after we left, that mulch blew all across the paddock in a short but fierce wind. Here it is protecting the garlic beautifully for one whole day – 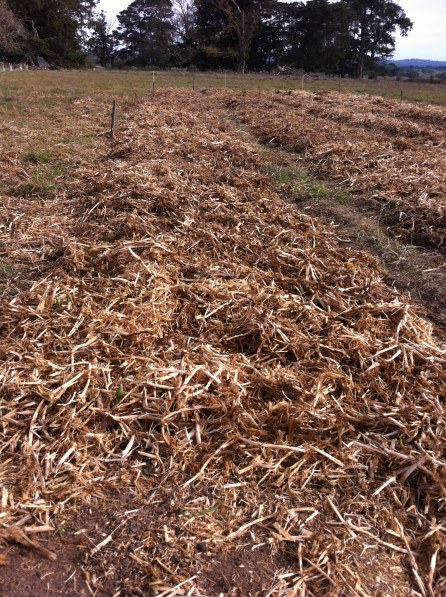 As winter set in, our secret Ballan cafe lulled us into a sleepy sense of security, like a siren at sea. And us, the hapless sailors, veering off at Fisken Street, beguiled by the mysterious pull of warm food and pots of tea and special 2nd hand finds. Weeds be damned! – 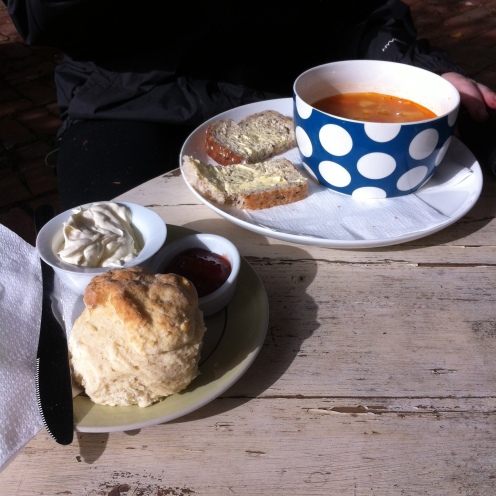 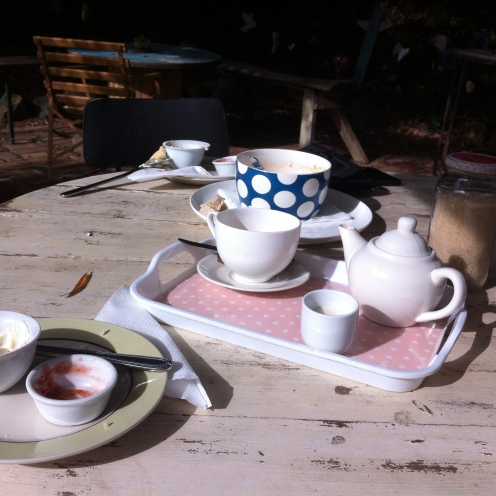 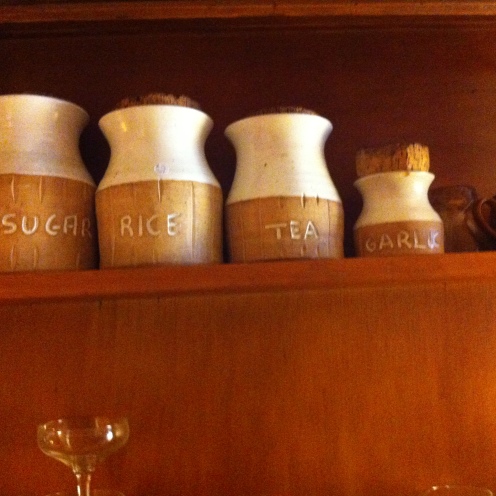 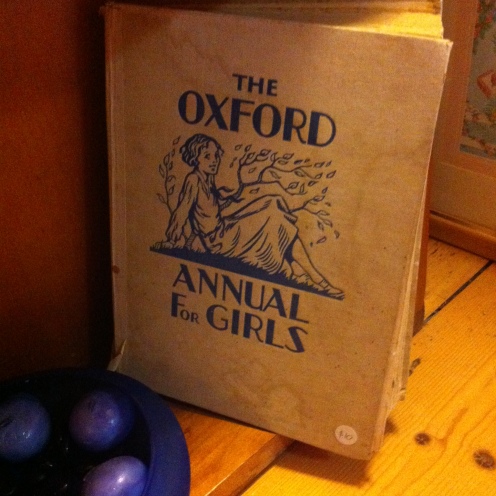 And then it slowly dawned on us, only a fraction too late. At the risk of sounding a bit like an old Australian folk song, over the winter our land was literally and lyrically beset by floods and weeds. 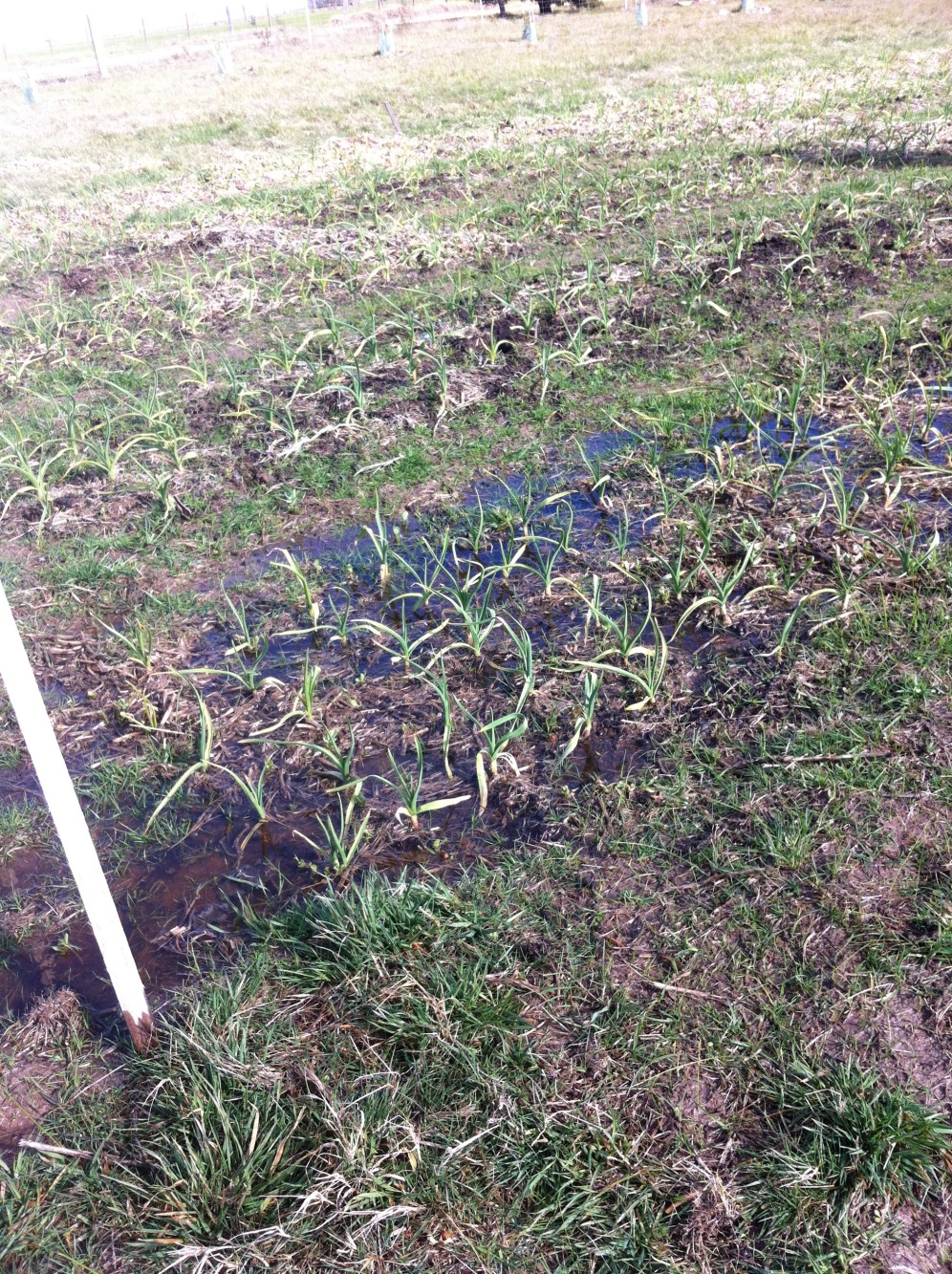 When the rain puddles ballooned into small lakes and sinkholes, we froze one weekend while digging channels (on the up side, this odd wet winter meant irrigation was basically a non-issue for the whole year).

The only thing left to do after that demoralising day was to take a rapper’s stance. And pray for drought –

It was, as you can see above, a dark and serious time for all of us. And with winter came other life stuff.  Visits out to the patch were sometimes a challenge – the distance from Melbourne was often a hindrance and timing was hard when five people had to synchronise  in order to meet up for work days. It went a little quiet out there in Ballan…

And then one day, it stopped raining and the sky brightened. The sun peeked back into our lives and the weather gave us a break.

As the least-equipped for winter coldness, I jumped at the chance Spring provided, and headed for the hills. I took to those weeds like I was digging for victory. Motivated by a mixture of parental-guilt and general thawing out, I loved digging these dirty little hands into soft brown dirt til the sun faded –

For the rest of Spring each of us headed out in ones and twos to weed and weed and weed. It was a slow job, done by hand with our ho mi. In some rows it felt painstakingly tedious and similar to trying to rip up an entire lawn.

Soon, there came some semblance of the garlic crop we envisioned back in April. With the help of some coffee sacks and a second layering of mulch we were finally back in business.

There were a few weeks where we wondered if we’d done enough. If the garlic would withstand all that digging up of the soil around it. If the bulbs and cloves would even form after the months of torrential rain. I confess, I felt a little drop in hope…until I got this photo in my inbox with the face that said it all –

All that we needed now was some days of sunshine and to keep a close eye. Some more check-up visits were squeezed in and our garlic lovingly gazed at –

And that’s where we stand today. Ready or not those babies are coming out. After almost a year of the Ballanisters’ Farming Adventure we have come to the best part: The Harvest, which means, the end of the year and the end of the crop.

After Saturday, there’ll be no more excuses to visit Ballan or to tend to the garlic. Although I’m really excited to finally get to reap the rewards of our hard work, it’s also a little sad to say goodbye to that big brown paddock, to Donald, to the cows, to the philosophy and existential musings that came from long hours of weeding.

It’s worth noting that the Ballanister Five would have almost surely not made it without several good sorts that helped us. Perhaps the biggest thing to take from this year is that nobody can farm solo. The Blues Brothers were right, everybody needs somebody and we certainly needed these fine people –

Per – Chief rotary hoe manager and our general Go-To guy, he really put the F in Facillitator.  Per was basically our fifth Beatle, offering many hours on the farm, giving pep talks when morale was low, willing to join us for important ‘meetings’ at pubs and stepping in whenever shit got real.

Mohan – our generous benefactor and owner of the land, Mohan literally gave us the keys to the kingdom, giving us space in his shed and access to the water tank. He made no stipulations on how we farmed the garlic and was always genuinely interested in how we were going. A positive force, we are really grateful for Mohan sharing his beautiful land with us.

Sophia – a mate of Ben’s, Sophia was roped into helping to weed (the least exciting of all the tasks this year) and spent the whole day being really cool about it. Quiet deliverer of wise words, she happily pressed on when we made her stay longer and work more.What a trooper.

Lealah – Adeline’s friend and another great volunteer who got roped into helping us out. She was talked into a ‘nice day trip to the country’ only to find she was helping us dig channels, lay mulch and generally and freeze her bum off all day. Another trooper.

Dick (dad)  Rochford – an old garlic farmer from way back, Dad came to Melbourne take a break from his garlic farm, only to spend a day digging up the dirt and helping with our garlic patch. Importantly, he chose not to laugh when he saw us plough a paddock with a lawn cutter…

The guys at Crossroads Rural Supplies  – These guys were our supplier of mulch at mates’ rates and supported the good cause of budding farmers. They delivered the mulch to our paddock and made sure to send their most handsome employee to do so. A few of us thought that was very kind.

Thrifty Minx – what can I say? Thrifty Minx sustained us throughout the year on scones and soup and pots of tea all cooked the way your grandma does it. These guys were the main apple on the stick for getting friends (and lets be honest- ourselves) out to the garlic some days. Without Thrify Minx, there would almost be no Ballanisters, and I personally am so in love with the place I think I’ll leave all my possessions to them in my will.

Padre Coffee – supplied us with roughly enough coffee sacks to bed a thousand homeless people, all I had to do was mention poor, young farmers growing garlic and they loaded up my car with them.

Farmer Incubator! –  Incubating farmers? Flipping great idea. These guys made it all happen in the first place. Without them, I might have not known where to start. Farmer Incubator gave us as a team the impetus to actually do it, they sourced the land,  organised workshops, and allowed us to ‘get a leg up’ (that’s cowboy talk). Farmers need friends and that’s something the Farmer Incubator team gave. I now know a whole raft of other farmy types which I only met from being a garlic pop-up farmer. Shameless plug here –  https://farmerincubator.org/pop-up-garlic-farmers/